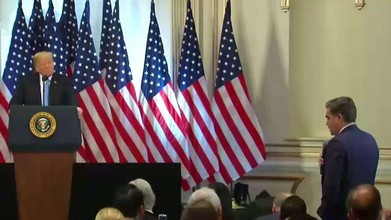 CNN reporter Jim Acosta prompts Trump to call on 'female reporter' at New York press conference
By Elizabeth Zwirz
Fox News
September 26, 2018
CNN reporter Jim Acosta asked President Trump whether "one of our female colleagues" could be called on after he questioned the president at a Wednesday press conference in New York City, prompting Trump to question Acosta's protocol request.

"What does he mean by that," Trump asked.

In a series of crosstalk, during which Trump repeatedly asked him to "explain," Acosta said he thought "it would be great if a female reporter would ask you a question about this issue."