Klayman: If NFL Players Had Done This It Would Be "OK" for the Leftist Media!
Go to www.FreedomWatchUSA.org to Support Leftist Media Strike Force! 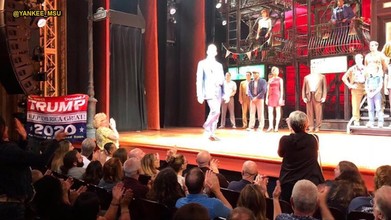 "The times we live in," tweeted audience member Joe Del Vicario, along with a pic showing the Broadway protest.