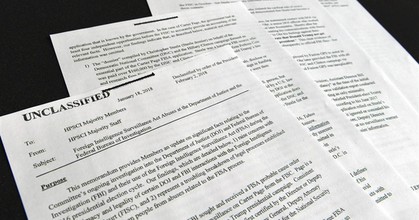 Nunes memo fails to make legal case against the FBI
By Danny Cevallos
NBC News
February 3, 2018
The House Intelligence Committee on Friday made public a Republican memo that questions the issuance of a FISA warrant for surveillance of former Trump campaign aide Carter Page.

The main point of the memo is this: The public's faith in the FISA process, and the courts' protection of individual rights, "is necessarily dependent on the government's production to the (FISC) court of all material and relevant facts," including "information potentially favorable to the target of the FISA application that is known by the government." In the Carter Page case, the memo suggests that the FISA warrant application was improper because "material and relevant" information was omitted.